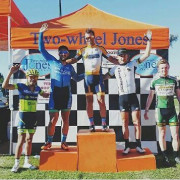 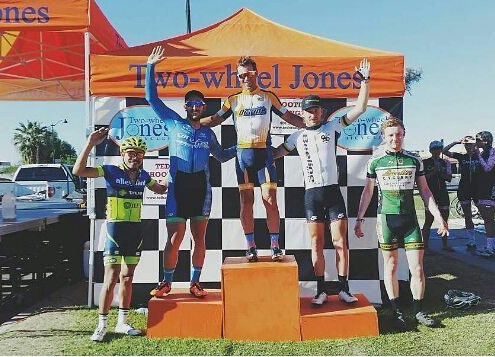 Race Report by Nathan Grill
I’m not ready for this temperature. It was hot. L-shaped course with a hard u-turn for the first corner and a long, long sprint. I’m guessing 300m from the corner. Anyways, it was Pro12, but 2s were scored separately. It made it interesting, to say the least. The 2s had different colored numbers and that made it a bit easier. For the first few laps it was hard, but that’s because I haven’t been riding that much lately. I tried to get in a few early moves, but after a few failed attempts, I decided to simply mark other 2s and only react if they got into something.

A move with 1s would have been a free ride to the line. A break gets up the road, all 1s and the 3 major teams represented, and then come all the little counters and chasing and whatnot. I’m still just marking 2s and letting the 1s do whatever they’re gonna do. Lap after lap after lap. Bell lap arrives and out of the first turn, a 2 attacks. 1s stay kinda chasing, but I attack approaching turn 2 and I’m closing. Doesn’t look like I’m being followed at this point. Go through turn 3 and… drop my chain and one of my shoes unclip. WHAT THE I CAN’T EVEN. I’M GOING TO CRASH ARGHHHHHH. Somehow get my foot back into the pedal and chain back on before turn 4 and get back into the strung out field around 4th wheel with the one cat 2 still ahead. Everyone starts sprinting out of the last corner. OMG IT’S SO FAR. I give it a go and kick to stay on. Then I kick again and get around a 2. Closing, closing, and I get the one guy that was ahead a few meters before the line. Couldn’t close the other 2, though.