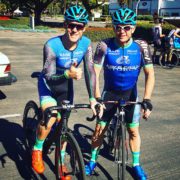 The Carlos Soto Memorial Crit takes place after the Santa Barbara County Road Race in Goleta, Ca. Many riders from the previous days race show up to battle it out in this early season crit. Team riders Scott Winzeler and Tony Rago line up with a field of 57 or so riders for the combined 45+ and 55+ field (to be scored separately). The field had several hitters in it including a national crit champ and several California current and former crit champs. The pace heated up after the first five or so laps and the attacks were plentiful! Finally a two man break did stick late in the race that left us with a bunch sprint finish. Scott was able to seal the 2nd Place spot in the 55+ field and Tony was able to bring home a top 10.

Next up we had team riders Nathan Grill, Andy Erickson and Taylor Sisson in the P123 field that was approx. 93 riders deep. Nathan got into a promising split with eight or so other riders but was quickly reeled in by the field. Several attacks and a 2 man break that looked to stick was caught on the last lap, our boys finished with the pack respectively. Great to have that race in the legs for upcoming races!

Finally we had team riders Steven Keltie and Sergei Vasilyev in the Cat 4 race. A very early break of two strong riders was able to stay away for the entire race and almost caught the field on the last lap. Our boys finished with the pack and are ready for the next event!

Great work by everyone for a solid and eventful weekend of racing in sunny Southern California!