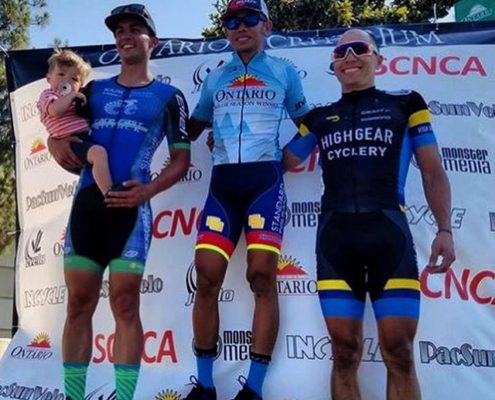 Team riders Mike Allec and Scott Winzeler line up in a field of 30 racers. This was Mike’s first race back so the stoke level was high! The plan was to stay up front, watch for any good breaks and go with one. Plenty of attacks but nothing sticks. Lap cards came out and Scott was setting up the lead out for Mike, two laps to go and Scott is sitting 2nd wheel with a Big Orange Cycling rider setting a good pace. He pulled off a little sooner than we would like leaving Scott 1st wheel going into the final lap. Scott kept a good hot pace, but going into turn one, a couple of Big Orange riders made a big move and attacked. This lit the field up and everyone responded, Scott and Mike did a great job getting to them, but just as they got there David Holland launched his sprint and sealed the deal. Solid team work on their part. Overall the boys finished with the pack but both were pleased with the results and was great to have Mike back in the mix!

David Holland’s video is at the bottom of the post! Thanks David!

Mike and Scott were back at it in a field of over 30 racers. Temps were approaching the 100 degree mark. The morning was getting warmer as was the racing. Within a few laps there was an attack followed by a few others that were able to bridge making it a total of 10-12 guys with most teams represented. Mike was in the break so Scott worked to reel in any chasers, the field wasn’t organized and the break now had over 15 seconds. Then it looked like the break was starting to attack each other, pulls were being skipped. A couple of guys were able to get away from the break and once that happened, it seemed like the larger break fell apart, now the gap is only 8 seconds or so. A couple of laps later they were all together again (except for the two off the front). Coming into the last lap, Scott had to surf a few wheels and was able to take top 5 in the final sprint for 7th overall. 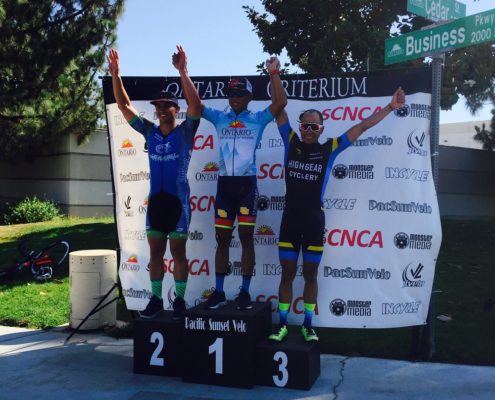 Team riders Nathan Grill, Danny Pearce and Scott Winzeler (yes his 3rd race of the day) line up in a field of 30 or so other racers. The temp was now over 100 degrees and the boys agreed that the extreme heat would allow for a break to stick. They saw it in the earlier races. Only a few guys in the field would be motivated to work due to the mild 102 temps. On the second lap, Nathan and another go on a flyer. This was perfect as it set up a counter on the third lap. Two riders counter as the field catches Nathan. Danny bridges, then another 3 riders bridge to them by the end of the lap. Now a break of six were working well to stay away and make it work. Thirty-five minutes into the race and the break catches the main field! Lapped!

Once rejoined, Danny asked Nathan and Scott to help weld the field together until the sprint. He pointed out the two riders that he thought were the most dangerous. If they go, we go.

For the next 30 minutes we played cat and mouse, covering moves every other lap. Felt like wind sprints. Calm, then a burst for 30-45 seconds. Repeat. Headed into the last lap, Scott had control of the front coming out of turn two. Danny was probably six wheels back. Nathan gives the green light to hit it. Scott punches it and gaps the field. (Let me remind you, Scott is on his third race of the day! Beast!) A couple heads turn, looking at who is going to go. One of the break away riders goes on the inside well before the 3rd turn. He gets a solid gap quick. Danny is surfing wheels at this point, sitting 4th and started his sprint halfway thru the chicane and was able to seal 2nd place! Great move on the winners part.

Danny gave a big THANK YOU to Nathan and Scott. They were instrumental in covering moves and discouraging another break from forming. Their pacing in the last lap was a huge help. 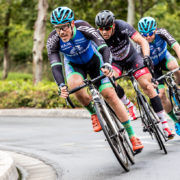 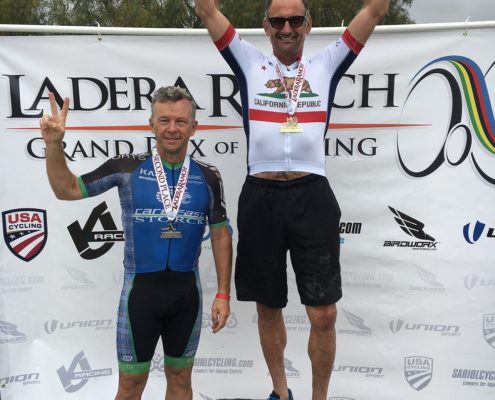 Team rider lined up in the Elite Masters 55+ in a field of 35 or so riders for the California State jersey. The conditions were wet, course had standing water on it, so the first several laps were pretty tame (around 22mph). Then the attacks started but no break lasted more than a few laps. With just under 2 to go Steve Strickler puts in a little effort & got separation and everyone looked around to see who was going to chase it down. Nobody did and he stayed away. Scott was able to win the bunch sprint for 2nd place! 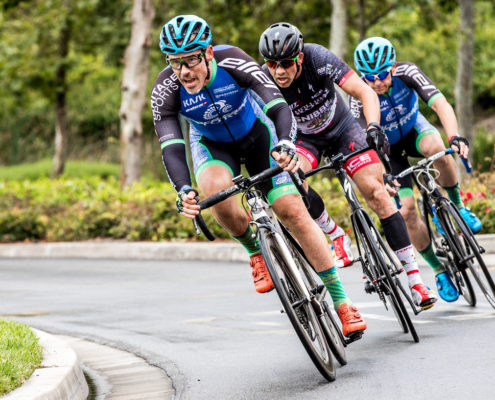 Team riders Tony Rago and Scott Winzeler line up in a field of 40 or so riders. Course is still damp and a couple of strong teams assembled. There were attacks from the whistle, reeled back and then a counter on lap 3 or so. Once again the field brought it back, Tony and Scott remained in the front of the race in anticipation of a break that may materialize and with the conditions and teams represented, it would have a solid chance. A local racer Pat Bos made a move going into turn 2 on lap 5 or so and the boys latched on, it was a strong effort to create seperation and the break was established. They had a 6-7sec gap as they came out of turn 4. There was another very bad crash that happened behind the break and the officials slowed the group down but allowed them to continue because the incident was isolated off to the left of the road. The guys worked well together and Scott got a prime on one of the laps. Three laps later they had nearly 20 secs, then a couple laps later close to 30 secs on the field. Headed into turn one a spectator was in the corner and spooked Pat causing all three riders to go down. Pat and Scott landed on grass in a median and Tony wasn’t as lucky and hit the asphalt pretty hard. Pat and Scott hurried back to the pits to get restarted but the EMT arrived with their vehicle for the previous crash, so they neutralized the race. Since there wasn’t much time left they ended up calling the race and had the 45s race all over again with the 35s. Tony and Scott were unable to restart due to mechanical issues and injury. 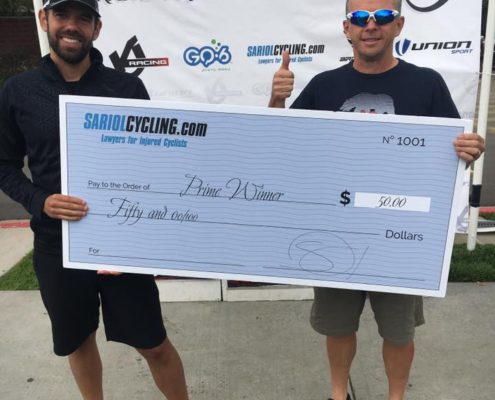 Unfortunately that is how racing goes, some bad luck there but the boys came home with minor injuries, nothing serious.

Team rider Jeff Mitchell lined up solo in a field of close to 50 other riders. By this time the course was dry and this field also had alot of teams represented. Since this is the state champs it would prove to be very active from the whistle. A break was established late in the race and was able to stay away. Jeff wasnt in a position to contend in the bunch sprint so he had to settle for a pack finish.